Q. We bought some lumber and it is a bit too high in MC, probably because it was stored incorrectly. How do we lower the MC safely?

A: Redrying lumber that has been kept in uncontrolled storage requires great care if the species being dried is prone to surface checking. The risk is that surface checks that were tightly closed may become permanently opened or internal hairline checks can occur. This is a risk with oak, chestnut and a few other hardwoods, but not pine, poplar and maple.

The lumber must be stickered for redrying.

Do not use steam spray or water spray during kiln warm-up.

Two temperature steps are suggested for the redrying operation. The first step should be about one day long at 130F or 140F. When the kiln temperature is reached, set the wet-bulb controller to achieve an EMC that is numerically halfway between the current MC of the lumber and the MC desired. It may be necessary to close the vents and add moisture at this time to achieve and maintain the correct humidity.

The second step should be at the final temperature of the drying phase of the basic schedule for the species being dried…usually 160F. The second temperature can be achieved by using several smaller steps, if desired, rather than making a 20F or greater immediate jump in temperature.

Surface checks already present may open, but they will close again as the wood dries. When the temperature is reached, set the controller to give an EMC 2 percent below the desired MC for hardwoods and 3 percent EMC below for softwoods. When the wettest kiln sample reaches the desired MC, stop the drying. 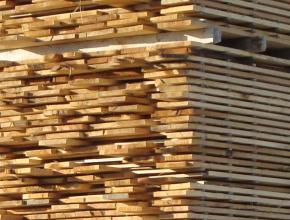 Next step after kiln drying and stress relief