Sedia's JumpSeat Wall provides touchdown short-term seating where space is limited. The chair is mounted 6” off the floor to facilitate cleaning and measures less than 4” when closed to maximize space. This wall-mounted chair is ideal for hallways, patient rooms, conference rooms, home entryways, mudrooms and walk-in closets. Sedia, which makes fold-down stadium seating, manufacturers the JumpSeat chair at its plant in High Point, North Carolina

The idea for the JumpSeat started with a client in Portland, Oregon - Ziba Design - which needed an auditorium chair to fit the narrow risers in its new space. The immediate challenge was geometric: how to make a seat that could support an adult and nearly disappear when not in use. The JumpSeat was developed: a sleek and compact chair that closes to as little as 4 inches deep.

"The design is about as minimal as you can get for an auditorium seat, which makes the JumpSeat really efficient in its use of space," says Sohrab Vossoughi, president of Ziba Design in Portland. The seat is only four inches deep when closed; the small footprint allows more seating in a smaller space without crowding.

"Materials-wise, you can't get much more efficient than two pieces of plywood," says Vossoughi. " It's a design that takes maximum advantage of the material properties."

Sedia Systems launched the JumpSeat globally in 2012, and has won more than 15 awards. At NeoCon 2015, Sedia Systems, which is headquartered in Chicago, showed new versions, including one with fold down arms. 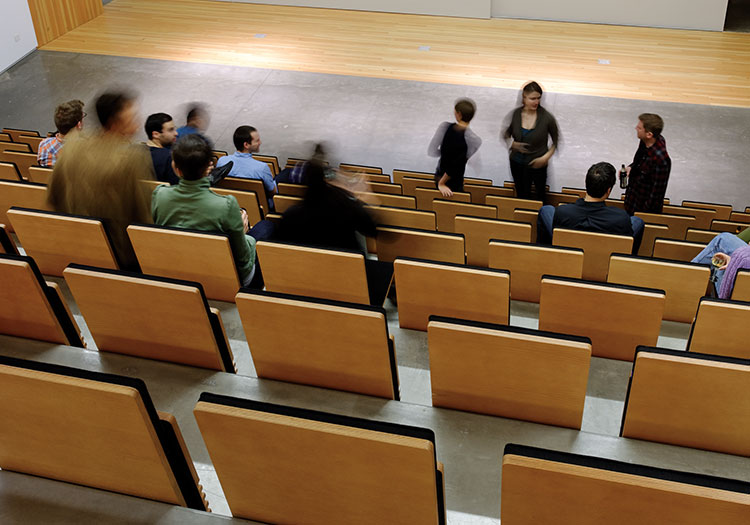