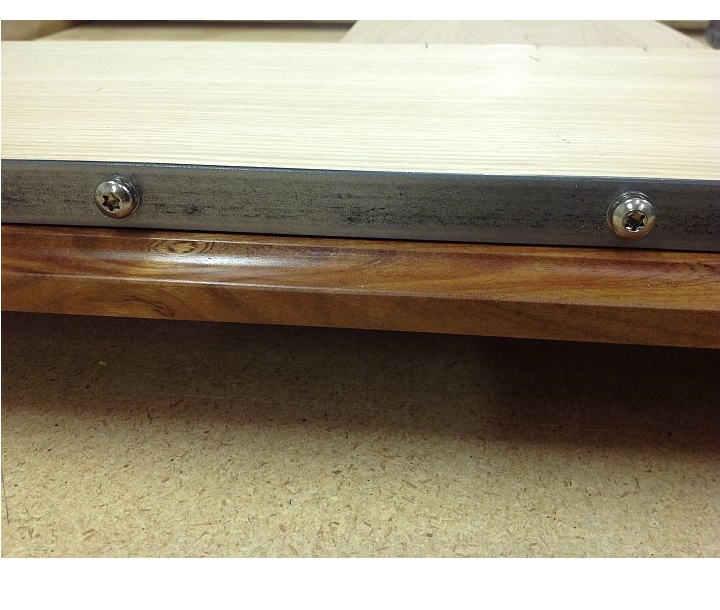 Last summer we embarked on, and are still finishing up, a huge remodel of our 1,100 square foot home. The remodel ended up reconfiguring our front room, which is our entryway, living room, and dining room. As such, it was out with the old dining table and in with a new table!

My wife loves to entertain, so we wanted to build the largest dining table the area could hold, which meant I would be building a 48″x96″ table top! This would allow us to comfortable seat eight, and up to ten people for larger functions.

A quick word on designing furniture, at least from my personal experience. I work best when I have constraints placed on me, whether that is a specific style or specific materials, budget, etc. Let’s look at this table as an example. My overall design criteria/constraints were the following: Budget Friendly, Industrial Styling, 4x8′ Tabletop, Pedestal Base

By outlining the criteria in the beginning, I was able to ignore all the design ideas that didn’t fit, helping me to declutter my mind and better zero in on the final look of the top. 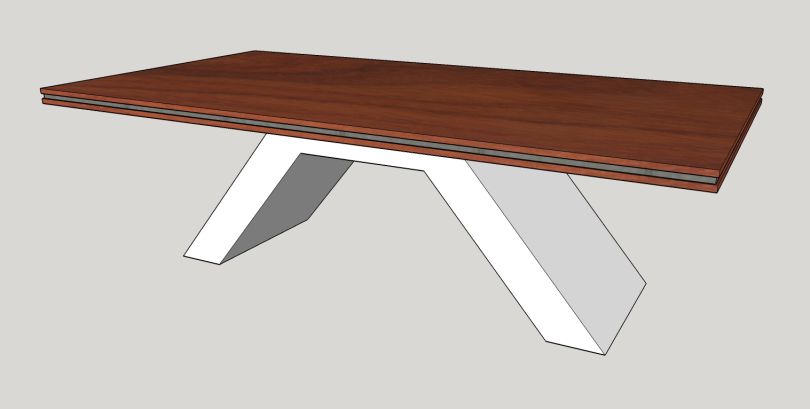 I have always wanted to build my future “dream” dining table out of walnut. It is by far my favorite domestic hardwood. But given that one of my design criteria was affordability, that was out. A 1.5″ thick solid walnut top would cost about $600 just for the wood, therefore, I needed to look at other options.

Fortunately, I had a bunch of 4/4 quartersawn Sapele left over from a job we completed a month or two earlier, which wasn’t free to my company, but was free to me! Here was the rub…it was 4/4 stock, meaning the table top would only be 3/4″ thick. I had to figure out a way to make the top thicker, or at least make it appear that way.

The easiest way to make thinner boards thicker is to glue two layers together, but I was afraid of wood movement and the potential for stress cracks over the years. I wanted to figure something else out. I settled on two layers of Sapele, but instead of gluing them together, I would separate them with an inert material, like 3/4″ plywood. This would give the top a nice “heavy” look, while still being very stable. 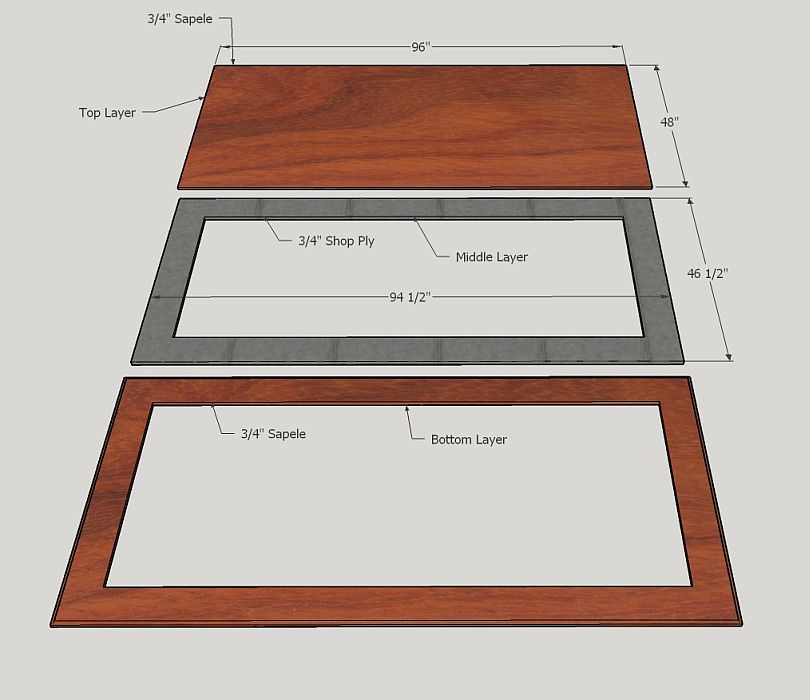 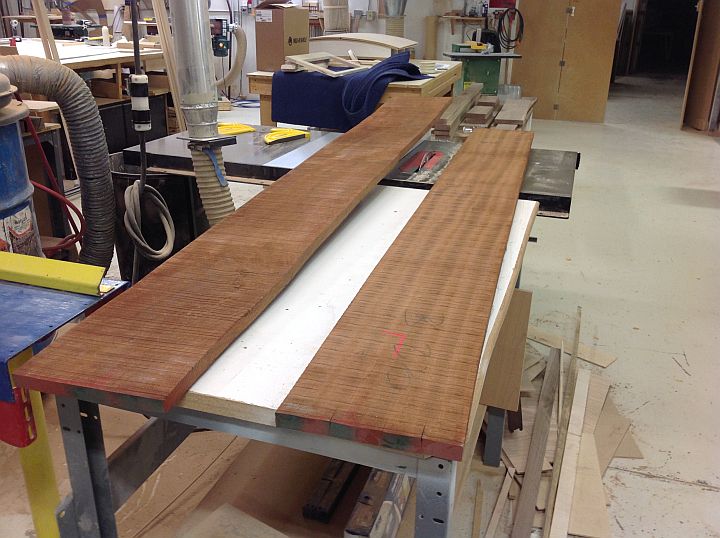 I began by milling the rough sawn 4/4 quartersawn Sapele lumber. I love rough sawn lumber, since the 4/4 stock generally comes 1.063″ thick, which gives you a lot of material to work with! 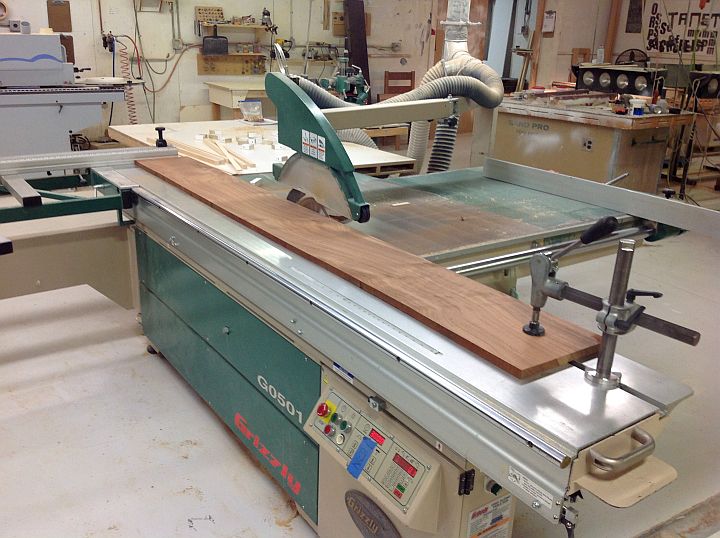 After jointing and planing the boards, I used the sliding table saw to straight line rip one edge. I didn’t take any pictures of the table top glue up, but it was nothing out of the ordinary…glue up each 2’x8′ half, send them through the widebelt, then glue up both halves to make the full 4’x8′ top. 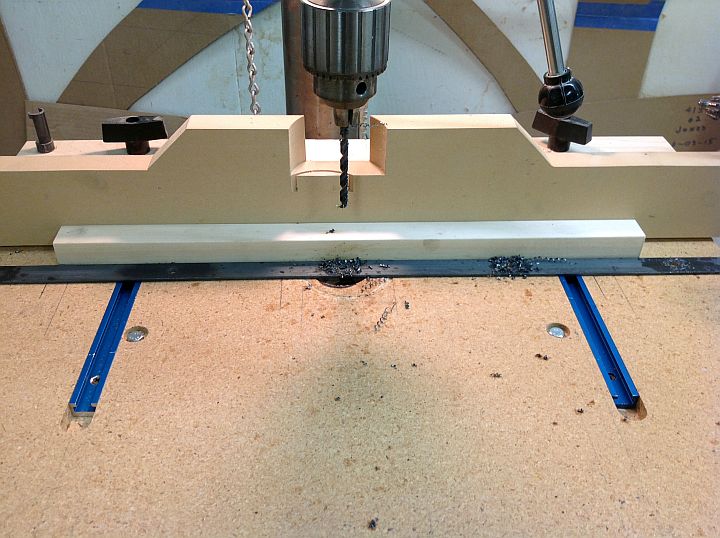 Previously, I mentioned that I would be sandwiching a layer of plywood between the top and bottom layers of Sapele, so I had to decide what to do with the edge of the plywood. I could have edgebanded it in Sapele, but that would be way to boring! Instead, I decided to recess the middle layer by 1″ all around and trim it out in a band of hot rolled steel. I have been on an industrial design kick lately, and this would be a perfect opportunity to incorporate that look into this piece.

Using my drill press set to the slowest setting, I drilled holes through the steel to accept some decorative bolts. 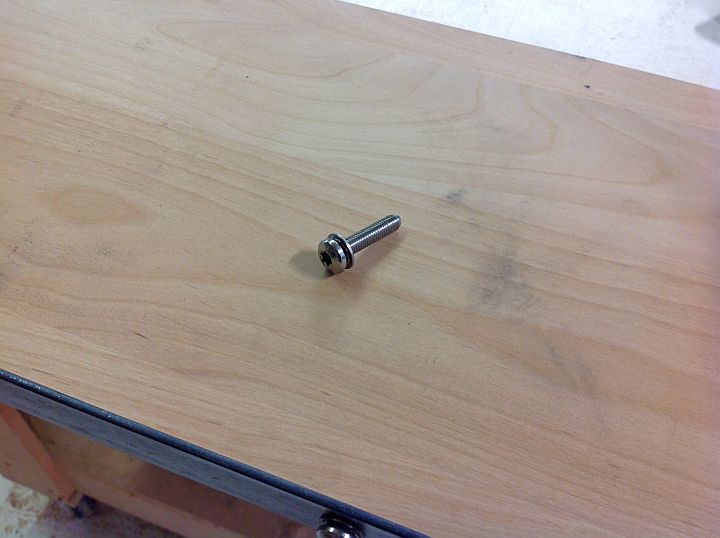 I picked up a bucket of machine bolts at a garage sale last summer which would be the perfect fastener to hold the steel banding, since they had a nice decorative head and washer and were a nice shiny stainless steel. 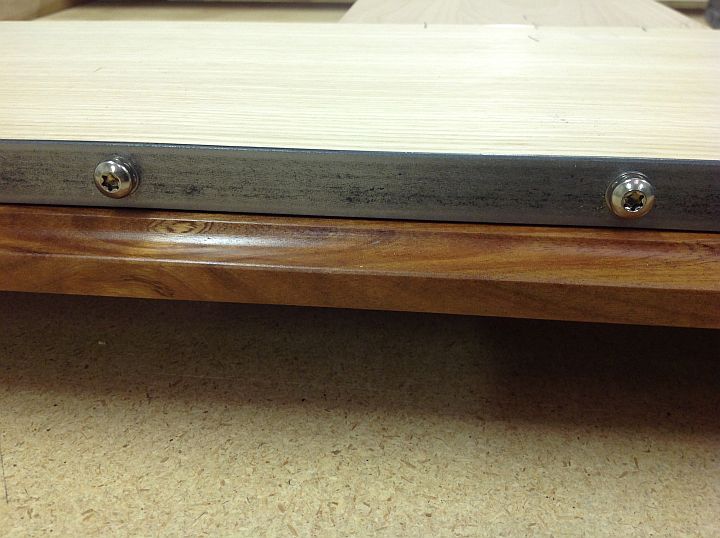 After bolting the steel banding to the plywood, I attached the bottom layer of Sapele. As you can see in the picture, I added an elongated cove detail to both the top and bottom layer in order to open up the middle and make it easier to see the decorative metal band and bolts. 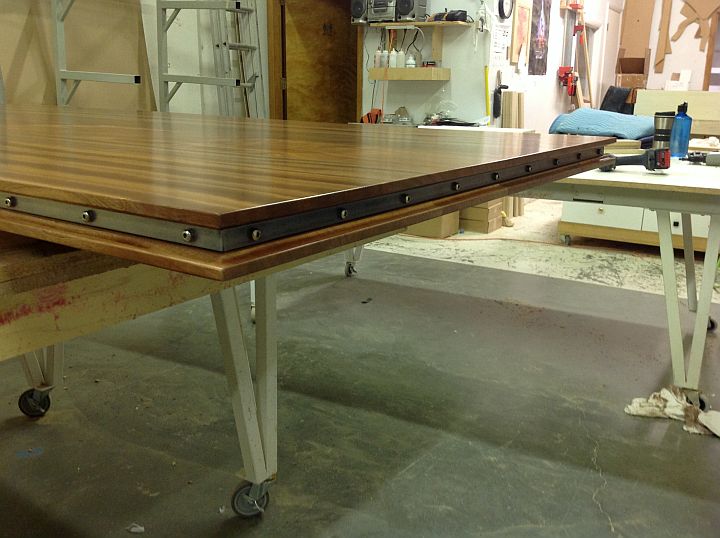 Here is an up close shot of the three layers that make up the top. I chose to use hot rolled steel, which has the dark mill scale, because once I sanded the majority of the mill scale away, I was left with a nice charcoaly texture. The steel is finished with a coat of Penetrol to add some shine and protect it from moisture. 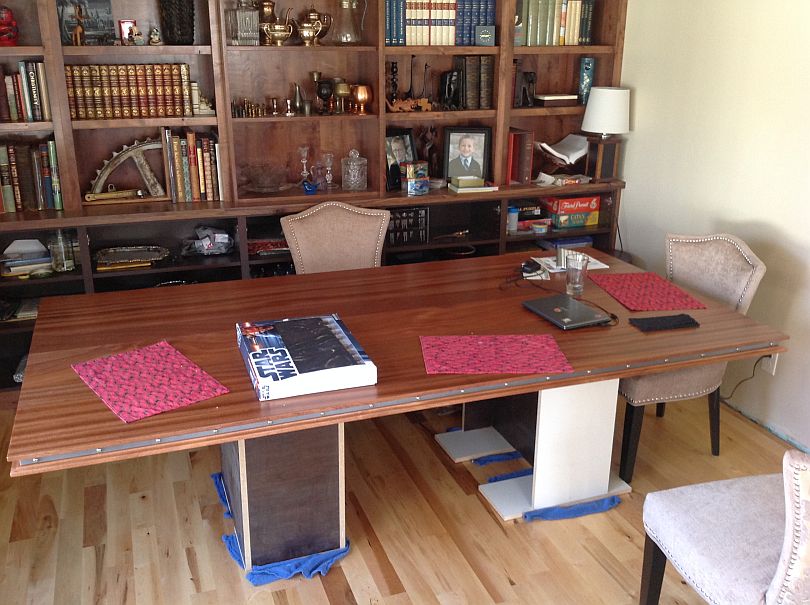 Here is the finished table top in our dining room. It sat atop two “custom” melamine pedestals while I worked on the base. The wall unit behind the table was also unfinished at the time, with the upper glass doors and the bottom doors still not completed.

In the next installment, we will look at the design and construction of the base of the table.

jared patchin
how to