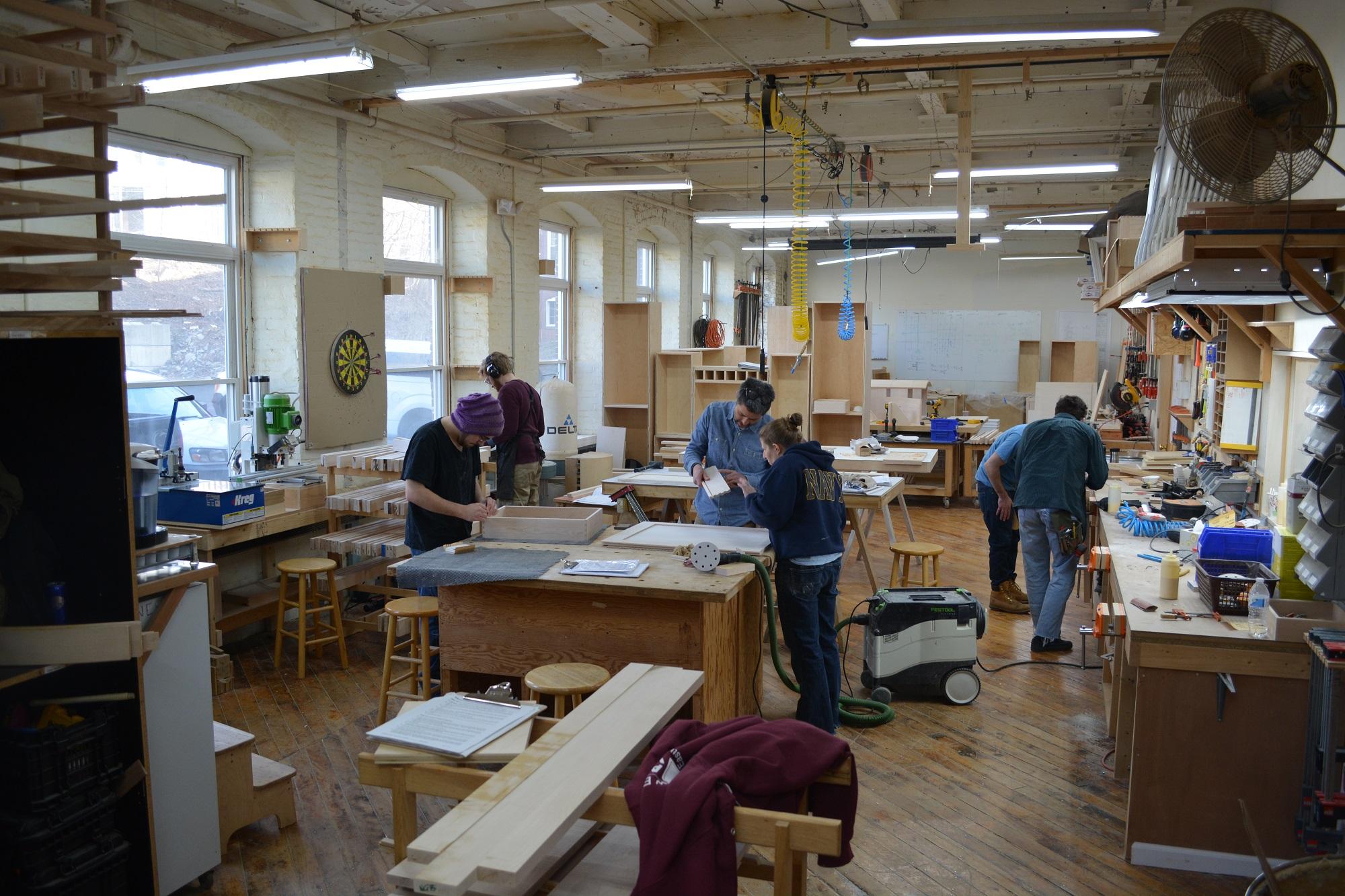 Students work on projects in one of two bench rooms at the school, which emphasizes professional work standards of responsibility and quality.
A visit to the New England School of Architectural Woodworking is more like a visit to a professional cabinet shop than it is to a school woodshop. For one thing, the students are a lot older.
“The average age is 32,” said Greg Larson, who with his wife bought the school in 2007 and turned it into a nationally recognized program. He explains that many of his students are career changers as well as a few younger students just starting out, but the emphasis is on professionalism. 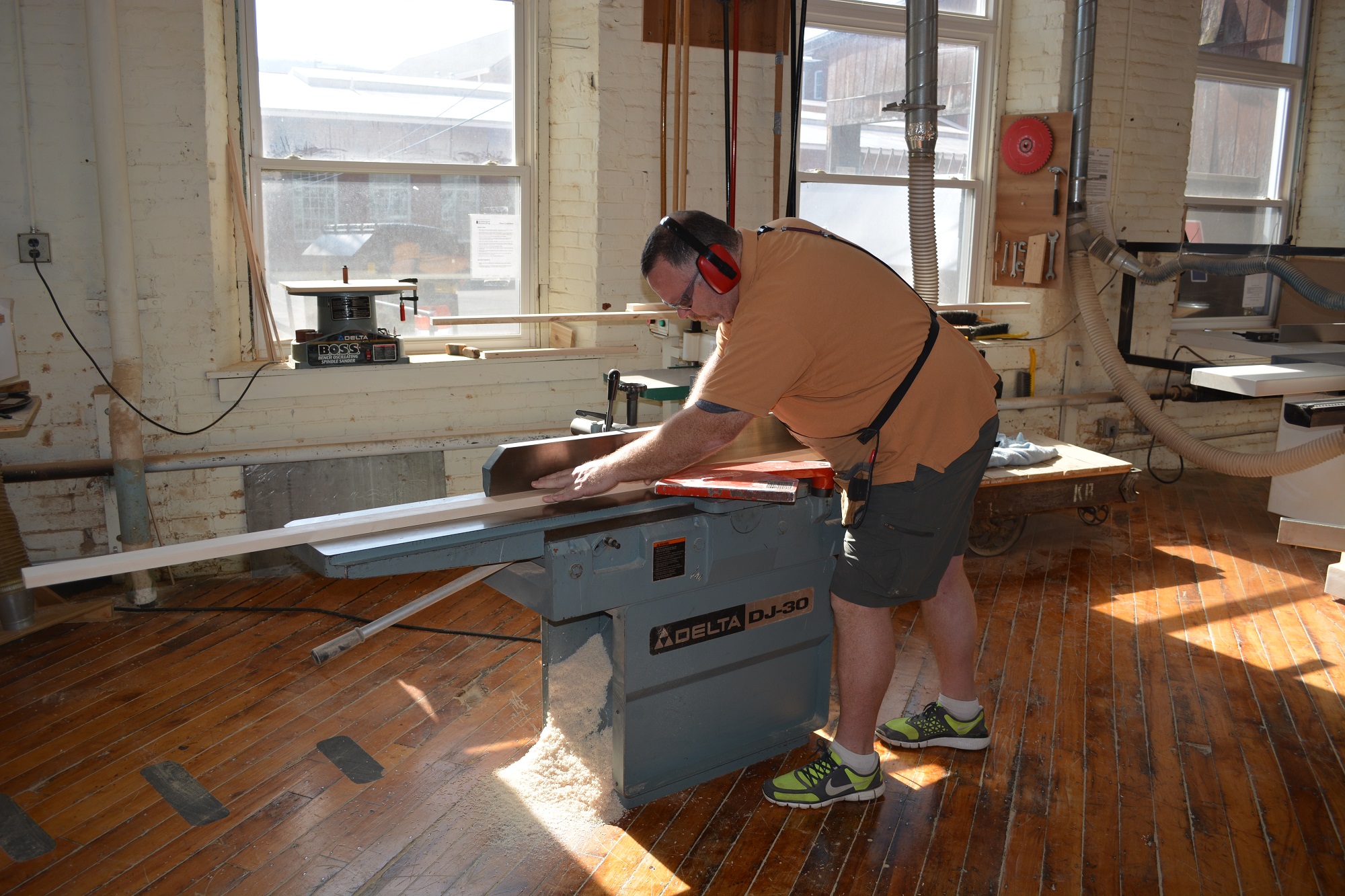 Kevin Fitzpatrick came to the New England School of Architectural Woodworking after a career in residential construction. He said he wanted to “get away from ladders and heavy work.”
That covers not just production skills taught and quality of work expected, but it also applies to dealing with paying customers. Each term culminates with a group project, typically a full kitchen, done for a homeowner in the area.
“We’re unique among woodworking schools in that, after learning cabinet-making fundamentals, our students work directly with members of the local community to design, draw, plan, build, finish and install projects, which these days are usually kitchens,” said Larson. “This exposes students to the entire project life-cycle and prepares them for a range of jobs within the industry or for self-employment. We also take several field trips to introduce students to a variety of cabinetmaking and specialty woodworking shops.” 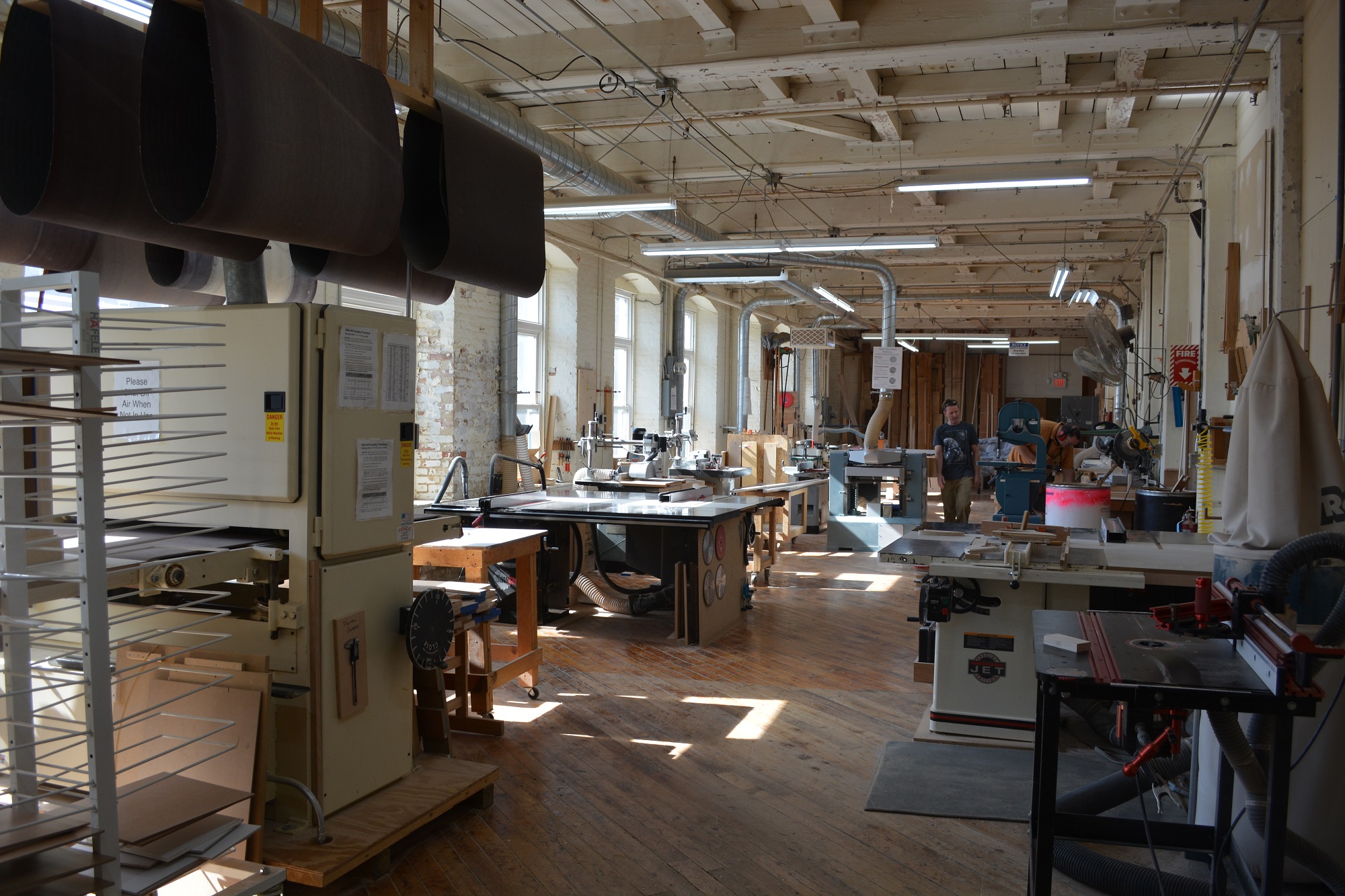 NESAW’s machine room is well equipped with professional grade conventional machines, but the school would eventually like to add a CNC router.
NESAW was born as the One Cottage Street School of Fine Woodworking in 1992, taking its name from its address in a historic red brick mill building in Easthampton, Massachusetts. Run by Michael Coffey, the school offered beginning and intermediate adult woodworking classes, and eventually architectural woodwork. Steve Squire and Faith Harrison bought the school in 1995, changing the name to New England School of Architectural Woodworking. They expanded the program, achieving national recognition.
In 2007, Greg and Margaret Larson bought the school, and Greg became full-time instructor, sharing his professional experience as an architectural woodworker. As a board member on the AWI National Skills Standard Initiative and part of the Woodworking Career Alliance, Greg said he and his wife’s primary goals are to develop more industry partnerships and to expand the use of technology at the school. Last year, he was recognized as national Educator of the Year in the Woodworking Machinery Industry Association Wooden Globe Awards program. 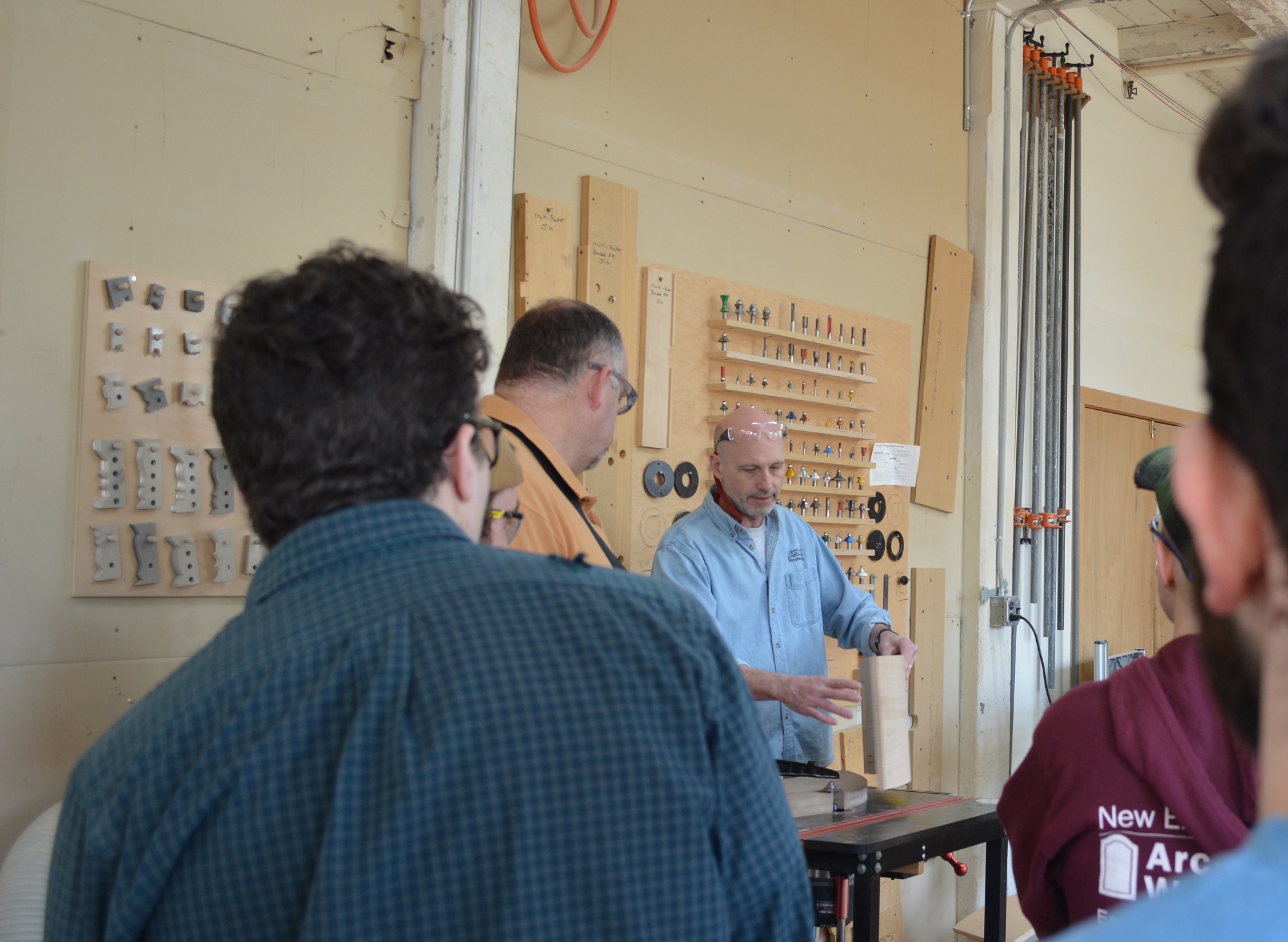 Greg Larson gathers his students to explain a process. He says he likes helping students work through problems. “I can’t teach as well if there weren’t mistakes,” he said.
While Larson would like to eventually add CNC manufacturing to the program, today the school’s 5,500 square feet is equipped much like a similar size conventional cabinet shop. There is a machine room, a couple of bench rooms and small finishing room, including a spray booth, where only water-based finishes are used.
Students sign up for an intensive five-month term, working eight hours a day. The program typically starts with each of the 11 students constructing a small cabinet, and then the entire class works together to build a kitchen or similar large built-in cabinet project.
Students learn to build to exacting AWI standards, just as in a professional shop. Of course, students don’t always get it right on the first try, but Larson says that’s an important part of the learning experience. “I can’t teach as well if there weren’t mistakes,” he said.
Students learn that there are often multiple ways to solve a problem or to build a certain cabinet, and because the kitchens the school builds are truly custom, there are always new features to provide additional lessons for the students. For example, the kitchen project this term included a cabinet with a veneered curved panel. 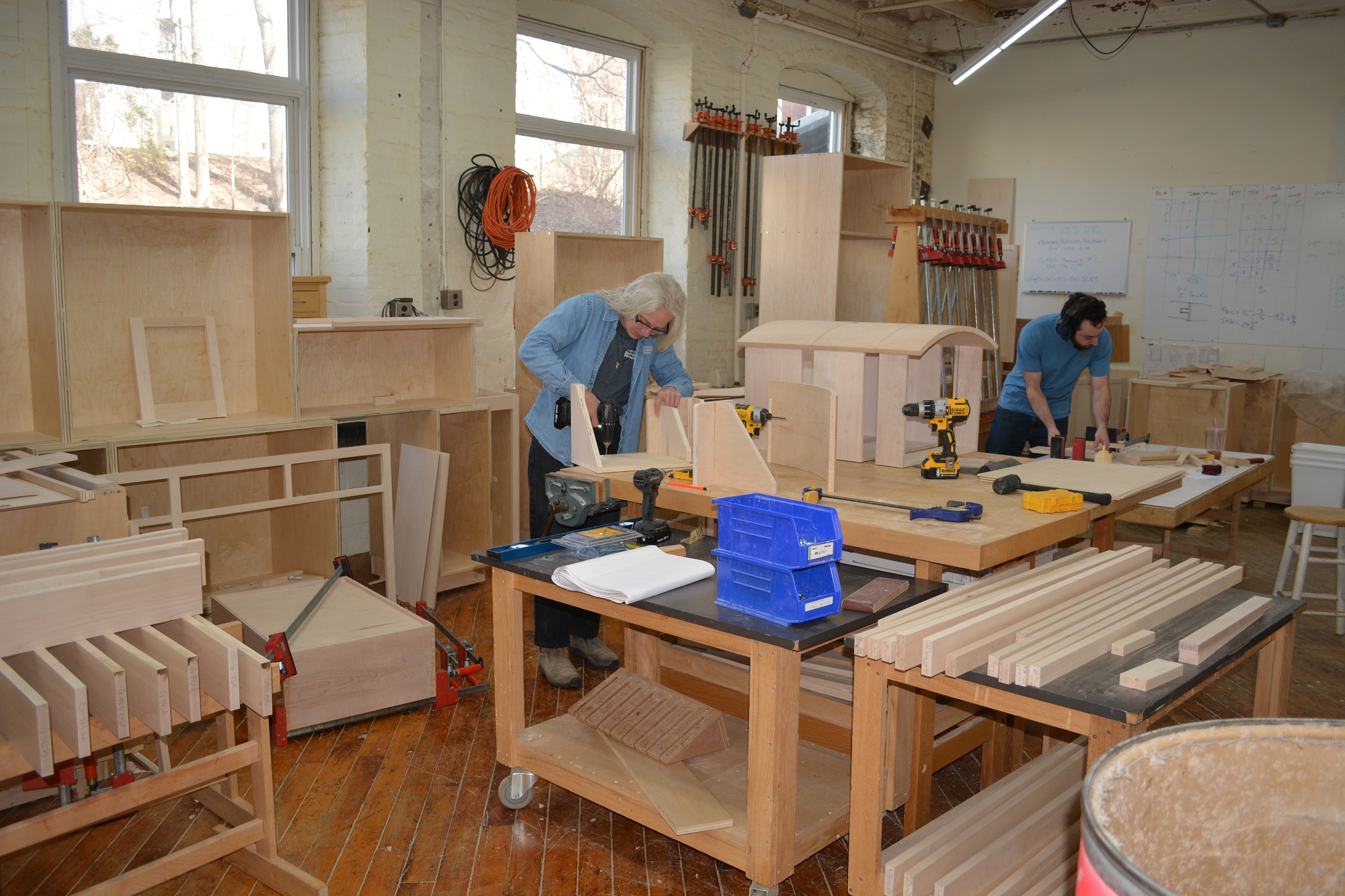 The five-month term culminates with the students collaborating on a kitchen project for a home in the local area, learning to do true professional custom work for real clients.
On a recent visit to the school, talking with the students paints a diverse picture. One woman is in a career change from being a yoga instructor. A man has come to the school after a career in residential construction and remodeling, saying he wants to “get away from ladders and heavy work.” He says it has been a challenge to adjust to the requirements of shop work vs. fieldwork. Other students include a former pharmacist, former caterer, former elementary school math teacher, and even a self-described “directionless 24-year-old.”
Marianne Ganzer came to the school after a 25-year career repairing violins. When that job went away, she found NESAW. Used to working with fine hand tools, she said, “At first the big machines scared me witless. They don’t anymore.” She hopes to use what she is learning to have a new career in architectural restoration.
Michael McKee, the former pharmacist, said he wanted work with his hands. He first chose a program at the North Bennet Street School in Boston, but he said, “This is more real world.” He wants to work for a cabinet shop.
“We spend a lot of time cultivating relationships with employers, so that our graduates have more options when it comes time to interview,” said Larson. “Because our students have proven themselves to be safe and skilled in a variety of woodworking operations, we have become the go-to choice for employees for a wide variety of cabinet shops, including some of the top employers in the country. In fact, we get calls nearly every week from employers looking to hire our graduates, but we don’t have enough graduates to fill all of them.” 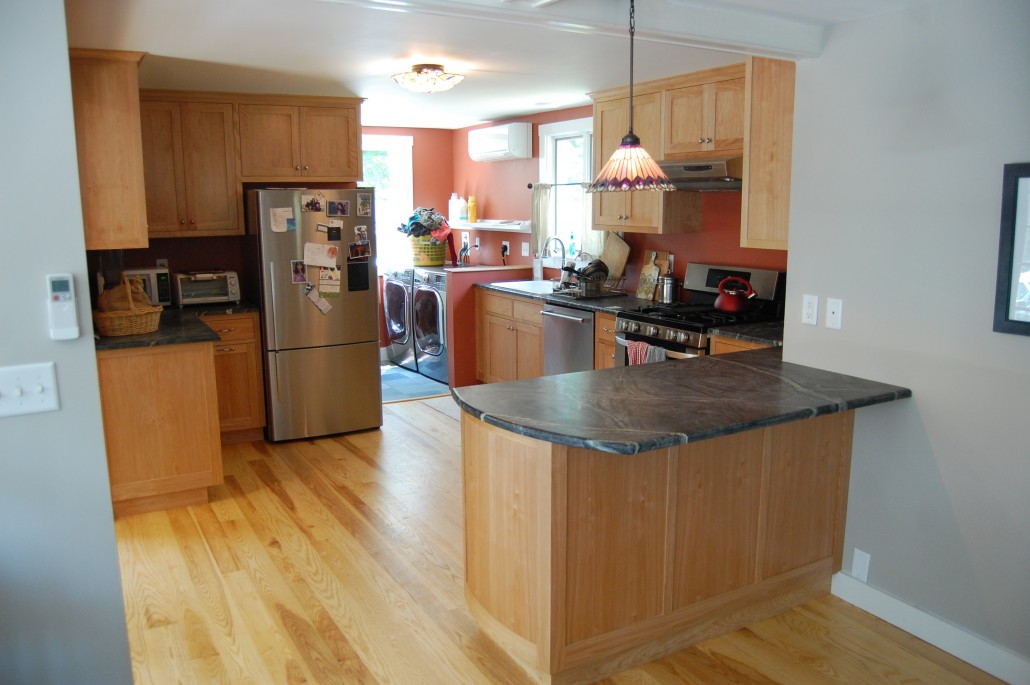 This kitchen was built by NESAW students in 2017. Each five-month program culminates in a big project done for paying customers.
While the Larsons want to expand, they want to keep the practical, hands-on instruction. They also face obstacles other schools don’t. While the private school is state licensed, it is not nationally accredited. And, since it is a for-profit school, it doesn’t qualify for some charitable donations.
The school has participated in the WCA Passport skills credentialing program since 2010. NESAW students accumulate more than 800 hours in the classroom by graduation, which qualifies them for a green credential if they choose to purchase a passport and earn the required tool stamps.
“It is always a challenge to find entry-level cabinetmakers with solid training in machine tool practice, reading shop drawings, joinery and fabrication techniques, and basic finishing skills,” said Tony Clarke, co-owner, VCA Inc., Northampton, Massachusetts. “NESAW has been a great resource for us. Three of our current employees are graduates of their program and valued members of our team.”
To watch a time-lapse video of NESAW students in action, scan the code with your mobile device or go to: https://www.facebook.com/nesaw1/videos/10154912799788890/
For more information about the school, visit www.nesaw.com.